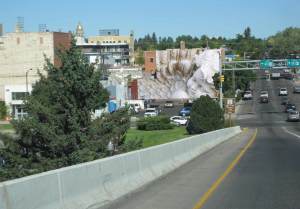 The Cherub Mural Project is being documented by Wyoming Community Media. Click on the image to watch a video and meet the artist.

There’s a new face in town. The Cheyenne Cherub Mural project has begun. Murray Properties decided to use the back of their building at the corner of 17th Street and Warren Avenue in Downtown Cheyenne as the canvas for a 41′ x 66′ mural of a renaissance cherub.

Muralist Michael Cooper and his wife Mickie operate a small Tennesee-based business called Murals & More and now find themselves in the Cowboy State with their paints and brushes. It’s a family affair with son Brad Lewis from Jackson also in on the project.

Mural Project Producer Ed Murray hired the Coopers when he and his wife Caren spied examples of their work in Nashville.

Why cherubs? Murray explains that cherubs are a mainstay in Old West saloon and hotel art and symbolize restfulness and peace. He cited his father’s antique collection which includes a large group of cherubs which was an influence on him while growing up in Cheyenne.

The Coopers are busy preparing the wall for the paint application, using high pressure water and a LEED – approved latex paint solvent to remove the old paint.

Cooper estimates that the project will take three weeks, but has allotted a month.

The “First Stroke” ceremony is set for Thursday August 18th at 10am.

Murray invites all to attend the event at the base of the mural just past the foot of the viaduct – 16th Street at Warren Avenue.

Keep up with the project progress by “liking” the A New Face in Town – Cheyenne Cherub Mural facebook page.